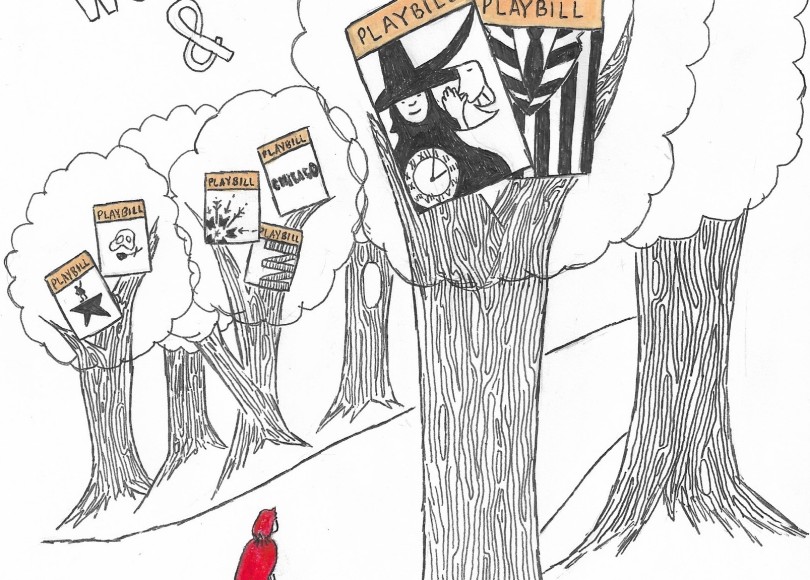 Humans of NPHS, we’ve got live theater! (what!!?) Yes, finally, after waiting for guidance from the state and CDC and many meetings with the district, directors Nancy Owen and Nicole Foti bring you not one, but a total of eight live performances in the coming month!

After the cancellation of last year’s spring musical, The Secret Garden, making sure this year’s seniors had an opportunity to perform was top priority. So, opening on Thursday May 20th at 7:30pm, New Paltz High School Drama Club proudly presents, Into The Woods! This show, chosen because of its smaller cast size, showcases the talent of thirteen seniors and two juniors, (and one familiar face from the class of 2020!). But don’t be fooled by the numbers; “It’s one of the hardest shows that a high school can put on, and doing it this year makes it all the more challenging!” says Jessica Dugatkin, who plays the leading role of Baker’s Wife. To follow district and state guidelines, actors must remain six feet apart when singing, and in a more recent change, three feet apart when saying lines. This, along with the inability to pass props directly to each other, has made blocking scenes quite a challenge. Another hurdle for the actors has been acclimating to the clear masks they wear when performing. “But,” Dugatkin says, “all our hard work has been starting to pay off and I can’t for everyone to see what we’ve been working on.” And pay off it shall! With just over two weeks until opening night, all 23 members of the cast and crew are putting in their weekly hours of hard work and dedication, and getting increasingly excited to bring live theater into people’s lives once again.

Into The Woods will have five performances; Thursday 5/20 at 7:30pm, Friday 5/21 at 7:30pm, Saturday 5/22 at 2pm and 7:30pm, and Sunday 5/23 at 2pm. As of right now, in accordance with New York State guidelines, all of our five shows are limited to 100 audience members, so tickets will be going FAST! Please visit this link to purchase your tickets beforehand, we will not be selling any tickets at the door as we have in past years.

But don’t worry! If you are unable to see Into The Woods, you’ll have another chance to see what the Drama Club has to offer. Opening on Thursday, June 3rd, and continuing through Saturday June 5th, is Broadway: The Revival! This cabaret style performance highlights the many talents of our underclassmen. By writing a script that is accurate to the current times of Covid closures and loss of Broadway, actors are able to put a realistic spin on many classic musical hits. Featuring singing, acting, and dancing, Broadway: The Revival has posed as a great outlet for new students to get to explore their talents and assume more prominent roles. Says Willa Voorhis, a freshman who portrays a news reporter, as well as being part of a Hamilton trio with fellow freshman Ana Kirsch and sophomore Lindsey Clinton, “It’s been a very fun experience, although challenging with Covid-19 guidelines.” But, like senior Jessica Dugatkin, Voorhis is, “so grateful that the school can pull off a show this year.” Similarly, Clinton remarked that “Even though this year’s shows are very different, being able to perform again has been a lot of fun,” and despite not being able to perform alongside the seniors, she thinks it, “ended up creating better bonds between those of us [underclassmen] who will be together in future years.” But overwhelmingly the sentiment still remains, “it’s just really great being back and able to perform.”

Broadway: The Revival will have three performances; Thursday 6/3, Friday 6/4, and Saturday 6/5, all at 7:30pm. Same as Into The Woods, all tickets will be pre-sale online to make Covid-friendly seating arrangements easiest, (ticket information not yet available), and limited to 100 audience members per show.

All in all, there is talent to be shown off and audiences to please. In a year of shutdowns, the NPHS Drama Club hopes you’ll come out to support fellow classmates, the arts, and yourself as we ‘play the music and light the lights’! “Bringing people together, inspiring, soothing and sharing: these are the powers of art, the importance of which has been made emphatically obvious during the COVID-19 pandemic,’’ said UN News in April of 2020, and the time has come to bring it back.

@jacksonsoper_ profiled a few of New Paltz High School’s premier athletes!
“This past year has been different to say the least. Covid-19 has affected everybody and everything, especially this school year for me personally. As a freshman my year and so many others have been marked by this pandemic. It was especially difficult to socialize and immerse myself into the new school environment. Our relationships with teachers and each other have been greatly diminished, and teachers have had to drastically change their teaching methods to accommodate this deadly disease.”
“The pandemic showed that we need to improve in so many ways. From offering more classes online to ensuring high schooler’s mental health is made priority, we have so much room to grow. But I really do believe we can get there. For all the horrors of COVID-19, it may have been the kick that the educational world needed to step into the 21st century.”
“America is facing another racial reckoning, and this time Asian Americans are in the picture. But the recent rise in reported anti-Asian hate crimes doesn’t even begin to encompass the experience of Asian people in America. This May, there has been a great din around Asian American and Pacific Islander Heritage Month, more than I’ve ever seen. In fact, celebration of Asian cultures has been historically muted, and most Americans weren’t even aware of the heritage month until 2021. I know I wasn’t, and I remember wondering why there wasn’t an event recognizing my culture when I saw Black history and Hispanic heritage months being celebrated. This is not to say that those cultures don’t deserve to be celebrated, or that the struggles of black and brown communities are less noteworthy than those of the Asian community. There is no comparison for how people of different minority groups have been persecuted, and there is no competition for the “hardest struggle.” However, the plight of Asian Americans is most definitely downplayed and underrepresented in America.”
“This is a general truth that has become increasingly clear to everyone, in far more contexts than just school. People have had ample time to reflect on normalcy, and the things they used to take for granted. Overcoming the obstacles created in the most simple tasks this year has brought to light not only what was overlooked, but what people believe themselves to be capable of.”
Surprise! The Maroon has come out with an unexpected physical copy! We want it to serve as a keepsake of the crazy past 15 months. Including some of our favorite pieces from the past year as well as some never before seen ones. In addition, the Senior Map for the Class of 2021 is included on pages 6 and 7!

Click the icon below to read last year’s issues!