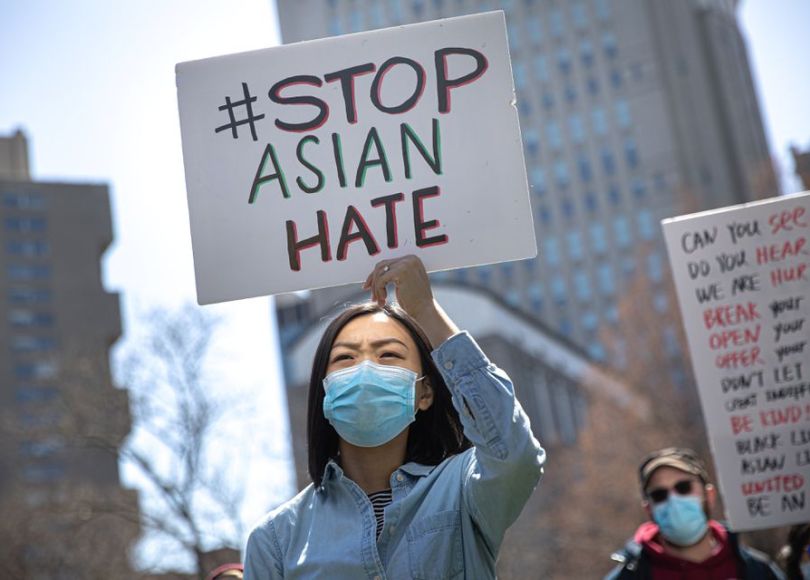 I really hit a blank while writing this piece.  For a few weeks, I struggled with whether I’m the right person to write this, whether my voice can encompass a group of people whose voice is startlingly silent.  I’m half Chinese, and almost everyone on my dad’s side of the family has emigrated from China or Hong Kong to America.  I was born here, and my Asian heritage doesn’t permeate my life the way that it does for most of my relatives, but I am reminded of it often, and it has given me a unique perspective in a town that’s overwhelmingly white.  Ultimately, I’ve decided that I’m not the right person to write about the perspective of every Asian person in America, but I have enough experience being Asian and conversing with Asian family and friends to write what is to my knowledge a shared experience among many Asian Americans.

America is facing another racial reckoning, and this time Asian Americans are in the picture.  But the recent rise in reported anti-Asian hate crimes doesn’t even begin to encompass the experience of Asian people in America.  This May, there has been a great din around Asian American and Pacific Islander Heritage Month, more than I’ve ever seen.  In fact, celebration of Asian cultures has been historically muted, and most Americans weren’t even aware of the heritage month until 2021.  I know I wasn’t, and I remember wondering why there wasn’t an event recognizing my culture when I saw Black history and Hispanic heritage months being celebrated.  This is not to say that those cultures don’t deserve to be celebrated, or that the struggles of black and brown communities are less noteworthy than those of the Asian community.  There is no comparison for how people of different minority groups have been persecuted, and there is no competition for the “hardest struggle.”  However, the plight of Asian Americans is most definitely downplayed and underrepresented in America.

We produce a lot of media capturing the experiences of black Americans and Latino immigrants, but there is a distinct dearth of literature, movies or TV shows featuring Asian American characters, and the discrimination that we face.  That’s probably because it’s so subtle: until recently, there were no overt signs of racism against Asians.  Rather, there is a silent understanding built into American culture that paints a very limited picture for Asians.  We’re good at math and medicine, and not much else, great scholars whose achievements can be chalked up to a culture of meticulous study and “good genes,” and who don’t have strong opinions.  Asian employees are the last to get selected for a raise, and aren’t considered an impactful voter bloc, so we’re generally ignored by politicians.  The stereotype of the Kung Fu master speaking broken English is the most common depiction of Asian characters in common media. We’re expected to stay in Chinatown, or Koreatown, or whatever cultural enclaves have been developed, and stay out of the way.  Overall, we’re a people taken for granted, whose services are expected and whose standards are simultaneously higher and lower than the rest of society.

America tends to stay away from Asian culture and customs, letting our traditions be silently passed along from one generation to the next.  But I believe that Asian culture has power, and it should be shared beyond San Francisco and Lower Manhattan.  There is such an underappreciated diversity of beautiful and striking Asian heritage, and by sharing it with the country there will be a better understanding of what it means to be Asian, and why we’re so much more than a calculator or a stethoscope.  At the moment there is more receptiveness than ever before to Asian culture and issues, and we should take advantage of this moment of national attention to  present Asians as unique individuals with cultures that don’t define us, but rather supplement our vibrant characters.  Only then will we be able to truly place our identities both in America and in our countries of origin, and we can finally be defined as Asian Americans.