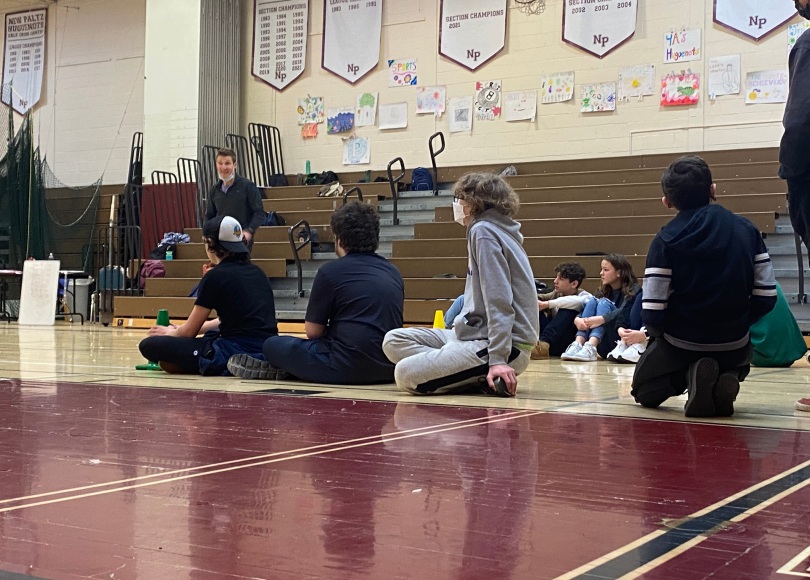 If you’re a student at New Paltz and were in PE 3rd quarter, you probably participated in the coaches’ “Cooperative Olympics.” You might not be a sporty person, so maybe you groaned when they announced the event, or you exchanged glances with your friends in skepticism. Maybe you were excited for something new and different from a normal gym class, or possibly you didn’t even have gym last quarter, and haven’t heard about this event at all. No matter where you stand on the Cooperative Olympics, we can all agree that what’s been happening in physical education class feels like a necessary change of pace.

“We love teaching it, it’s a lot of fun to teach,” Coach Mike Vance said. “We love seeing everyone shine in this when they wouldn’t shine in a typical sport.”

The Cooperative Olympics were started by Coach Tegler in the 1990’s, and are now hosted by Coach Tegler and Coach Vance. It’s a school wide event, held every two years, hosted during each grade’s respective gym class. There are various events beyond just athletic ones, including mental and artistic challenges (for those who don’t excel in athletics) and the events are completed by large teams, consisting of ten or more people.

The multitude of unconventional activities that take place during the Olympics gives the participants a chance to have fun while also thinking outside of the box. For example, in the ping pong pole, students had to use a bucket of water to get a ping pong ball to rise from the bottom to the top of the pole (without turning it over) by pouring water into the tube and covering the holes that had been drilled into it. From unique challenges like that, to simple badminton serves, long jumps, escape rooms, or even holding up a large ball using plungers, there was something for everyone willing to play. The Olympics give everyone the chance to grow closer to people they didn’t know very well before, or have fun with people they’re already close to.

The reason this year’s Cooperative Olympics is special is that it’s the first one since Covid began, so it carries a new weight since these sorts of cooperative events are exactly what we needed after quarantines and mask mandates for the past two years. It gives everyone a chance to socialize more, open up, and make new friends, while also reminding people how to work with others after such a long time apart.

Sidney Mayers, 9th grade, said, “I would do it again, it’s fun. I don’t feel closer to my teammates, but I enjoyed the ping pong pole.”

What makes the Olympics a great change of pace from the usual gym curriculum is the fact that it allows you-and even encourages you-to get to know new groups of people, or become closer with ones you already know, and experience your relationships with them in ways you have never had before. Even though I already knew everyone on my team, this gave me an opportunity to become closer to them and even closer to the other teams through healthy competition.

Aivyn Hemminger, 9th grade, commented, “I thought it was fun even though our team didn’t win, I enjoyed the cooperation.”

Even beyond the Olympics, any cooperative or team-based sport or activity always has a way of bringing people together, introducing you to new groups of people. Though this year’s Cooperative Olympics were especially beneficial, even in past years, the Olympics have given people who maybe aren’t as athletic or don’t like sports an opportunity to shine and be able to enjoy gym class in a way that they usually wouldn’t.

Chris Roth, 9th grade, said, “Although it was fun, they should’ve done the medals by grade so everyone actually had a chance, since seniors vs. freshman isn’t really fair.”

Some more competitive people didn’t appreciate the school-wide medal system, since it gave freshmen a low chance of winning against seniors, but I figure that’s a small price to pay for the unity of New Paltz high school. Although the odds are stacked against freshmen when they are pitted against seniors, they will be able to prove themselves at the next Olympics, and competing against the whole school creates a sense of community, which is much needed in these trying times.