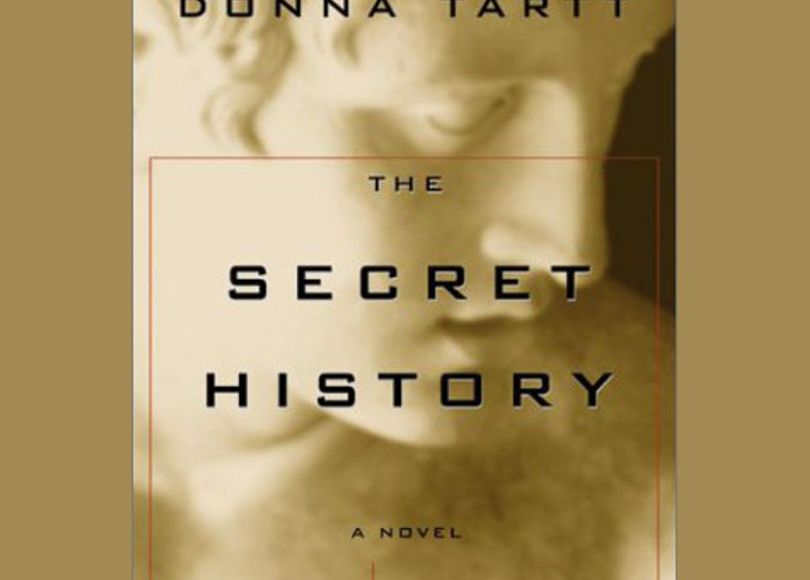 The Secret History by Donna Tartt follows the story of Richard Papen, the ultimate pathetic, male-manipulator who transfers to an isolated New England college. Richard quickly becomes wrapped up with the exclusive Greek program and it’s tightly-knit members. Of these members, include Julian Morrow- the terrifyingly influential Greek professor with a flare for the dramatic, Henry Winter- the quiet yet wildly intimidating prodigy, Camilla and Charles Macaulay- the timelessly beautiful and abnormally close twins, Francis Abernathy- the ridiculously stylish hypochondriac, and Bunny Corcoran- the doomed trust fund baby with an un-refrained-from habit of condescension.

We first follow Richard through his attempts to integrate into the lives of his new found peers and their cultish group. Eventually Richard befriends Bunny (Edmund) Corcoran and uses their budding friendship as a ticket to their secret society-esque clique, and bonds with each of the other students. As time goes by and richard is allowed deeper into the world of these peculiar characters (who Richard finds to be much more peculiar than he could have ever imagined) he discovers that the seemingly harmonious nature of their group is all but a farce, and in reality and unsettling discord lies among them. In this disturbing modern classic Tartt explores not only the intricate depths of the human mind and it’s ways of coping with guilt, but also the idea of obsession and its one-way path to destruction.

The novel itself would be, by many, best described as character driven rather than plot driven. Though this characterization is by no means intended to discredit the skillfully crafted and meticulously planned plot of the novel, only to emphasize the importance of the characters themselves. Though the book is told from the perspective of Richard, it could easily be argued that the manipulative Henry Winter is actually the main focus of the story. Tartt impossibly writes Henry as a character one can’t help but be enthralled by, despite his many less than good-natured actions over the course of the book. On paper, Henry Winter is the dream man: intelligent, good mannered, respectful, well-dressed- but in reality there is a strangely disquieting quality about him. Even in Richard’s initial sighting of the boy he laments “he might have been handsome had his features been less set, or his eyes, behind glasses, less expressionless and blank.” Through just her minimal descriptions Tartt cleverly alludes to the oddities of Henry’s personality.

Though Henry Winter is not the sole focus of this captivating story, other players such as Bunny Corcoran play just as large a role as he does, even if not in the same way. Bunny is nearly the exact opposite of our narrator Richard- he comes from a wealthy, close-knit family, and has seemingly (key word) stable relationships with both his friends and decorous girlfriend Marion. The two even have different preferences when it comes to which substances they like to use (which, just for warning, is a common topic throughout the book), Bunny preferring the bottle, and Richard preferring a substance often contained in bottles, specifically small, cylindrical, orange ones. At first glance, Bunny is an upbeat, enthusiastic fellow, one who you would think would use phrases such as “by golly!” and “gee whiz!” despite being a college student in the mid-1980’s. Though as Richard comes to know Bunny better, it is revealed that his diction is not the only outdated thing about him. Bunny quickly goes from being a welcoming and comforting character- and Richards way into the cliquish Greek society- to a bigoted money-fiend who endlessly taunts the people who are supposed to be his best friends. As one would expect, this does not bode well among Bunny’s peers and contributes to a cacophony of conflicts that plague the lives of the characters throughout the novel.

Somehow, beyond my realm of comprehension, Donna Tartt is able to write such an incredible, character-centric novel despite every single one of the characters being wildly unlikeable. Though Tartt’s writing may be sometimes verbose and pretentious, the story she tells is incredibly raw and uncomfortable, and her characters fit perfectly into the narrative. They are real and complicated, full of secrets and eccentricities, and could easily be written as likeable characters, but for the book to have the effect it does now, they can’t be likeable. If any number of the people  the story surrounds had been devoid of their line-drawing flaws or mistakes, it would lose so much of it’s believability because no likeable or good people would do any of the things that Tartt’s characters do. That’s so much of the brilliance of Tartt’s writing, she can take a story about college-aged philhellenes who end up murdering their friend and make it have the same or even more of an impact than a story with a realistic plot. If this book had been written by anyone other than Donna Tartt herself, it would not have the same effect that it does now, it would not make you squirm or gasp or ignore your life because you just have to keep reading. The Secret History is a perfectly immersive novel, grabbing your attention with the very first line and getting you hooked on it’s addictiveness. Although, it is absolutely not the story it appears to be, it is not welcoming, inspiring or hopeful, but rather subtle and uneasy. It is not the story of college students exploring the world of knowledge but the story of things taken too far, and secrets held for too long.